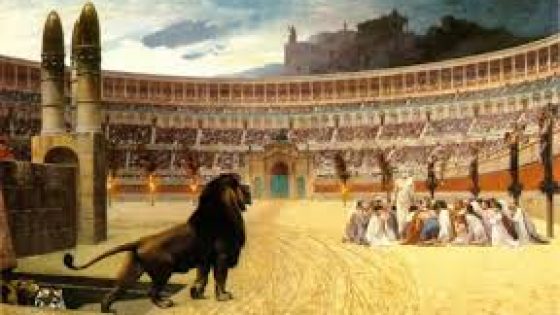 I have always been fascinated by martyrs; people both young and old who were compelled by a cause far greater than themselves, filled with a passionate zeal to spread the Gospel of Jesus Christ to every tribe, tongue and nation, even if that meant that their stand would cost them their lives…

As I look at the state of the world today, with unjust laws being passed and the Word of God being removed from its rightful place as the cornerstone (and this is not just happening in America, but worldwide.) I am being faced with the stark reality that martyrdom may even be headed for the Body of Christ here in America. As I was contemplating the potential ramifications of this, I realized two things.

First; The American church (generally, not specifically) has done an utterly abysmal job at conveying the cost that is associated with the cause of Christ. We have bred apathetic, indecisive “pew potatoes” who just send money to those among us who they deem to be “called’ or “brave enough” to go; relying on them to do all of the heavy lifting and “give feet to their prayers”. But when Jesus spoke in Matthew 28:19 and Mark 16:15, He was not just issuing a call to His disciples, because if that was the case then the Gospel would have died out after a few generations. It was a call to ALL believers.

Secondly; The environment in which my team and I will be ministering this upcoming summer is not the most conducive and welcoming to this Gospel which we live. The people we are going to are opposed to the notion that the Son of God became flesh and dwelt among us, and became the ultimate sacrifice for our shortcomings, triumphing over the death grip of sin in our lives. This is a foreign concept to them, and one that they usually greet with hostility and anger. In short, we are not going to a safe place.

As I was pondering all of this, I came across an especially moving story of a young martyr from the African nation of Rwanda  (probably not much older than my team) who was completely unafraid and unashamed of this Man we call Jesus, and refused to back down from his beliefs – even in the face of certain death. These were his last words:

I am a part of the “Fellowship of the Unashamed.” The die has been cast. The decision has been made. I have stepped over the line. I won’t look back, let up, slow down, back away or be still.

I no longer need preeminence, prosperity, position, promotions, plaudits or popularity. I don’t have to be right, first, tops, recognized, praised, regarded or rewarded. I now live by faith, lean on His presence, love with patience, live by prayer and labor with power.

My face is set, my gait is fast, my goal is heaven, my road is narrow, my way is rough, my companions are few, my Guide is reliable and my mission is clear. I cannot be bought, compromised, detoured, lured away, turned back, deluded or delayed. I will not flinch in the face of sacrifice, hesitate in the presence of adversity, negotiate at the table of the enemy, ponder at the pool of popularity or meander in the maze of mediocrity.

I won’t give up, shut up, let up or slow up until I have stayed up, stored up, prayed up, paid up and spoken up for the cause of Christ. I am a disciple of Jesus. I must go till He comes, give till I drop, preach till all know and work till He stops me. And when He comes for His own, He will have no problem recognizing me. My banner is clear: I am a part of the “Fellowship of the Unashamed.”

Please don’t misunderstand me; I am not saying that my team and I are on some type of sanctified suicide mission (there is such a thing as FAITH!) because I firmly believe that we will return home alive and no worse for wear. I am just acknowledging the possibility that some of us (and maybe some of you) will eventually have to die for the cause of Christ.

Dietrich Bonhoeffer, a martyr during World War II summed it up like this: “When Christ calls a man, He bids them… Come, and die.”

I pray that when I am faced with this situation; that I will respond like the young man from Rwanda with the same fortitude and love for my Savior.

How will you respond??